At last I've included the famous Hotel Frontenac in a drawing, even if just one section, or slice of it. If I haven't come up with a composition that excites me. I have so much trouble with motivation. I like unexpected views and surprising croppings, and coming up with the right mix can take me a long, long time.

When I first arrived in Quebec, I was obsessed with this famous hotel, thinking that OF COURSE it would have to be the first thing I drew or painted. Now, with the help of a friend's insight, I realize that when a subject is too well known it can be the most difficult subject. Finding something new to say about a tourist attraction- and all of old Quebec is a tourist attraction- it is quite a challenge.

Here is a more typical view of the famous hotel, partly under renovation: 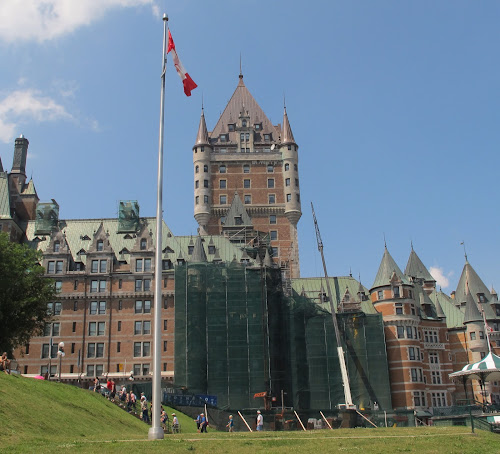 I like this Quebec City scene for its combination of many very different kinds of structures. There are the gracefully peak-roofed and historic public buildings in front, the newer glass-walled office buildings, and in the back at least two separate industrial sites, churning out smoke. I love the busyness and the cacophony of this layered mix, bound together by the distant mountains and the late afternoon light. 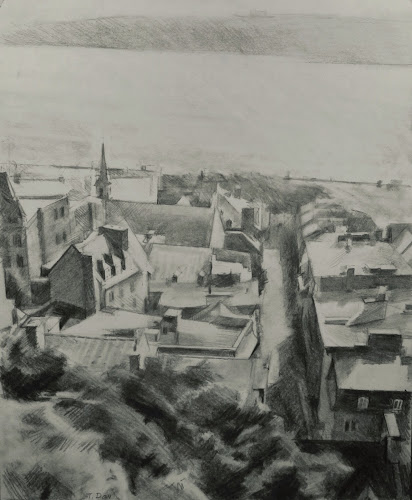 Another view of the oldest section of Quebec, Basse-Ville. Samuel de Champlain founded the first permanent settlement here in 1608.

I'm having a fantastic time drawing this wonderful city in pencil. Sometimes I simply crave getting the details down, which I can't do in a quick oil study.

I love the complexity of cityscapes. Here is a view of a trendy Quebec neighborhood called Saint-Roch, and far beyond. I always think a cityscape looks best with at least one church steeple. 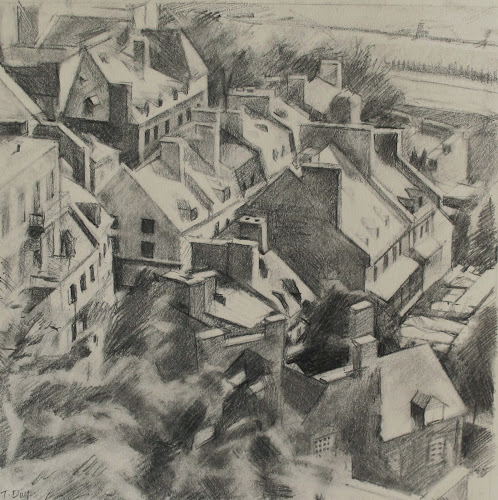 I'm simply mesmerized by the buildings in Vieux Quebec, especially the ones in the oldest section of Basse-Ville. Each one is so old yet so beautifully maintained, but it's the way they are nestled together that really grabs me. By the way, my father was an urban planner, and loved visiting this city.
I know, I know, I need to start painting, but I love drawing too. Not at first- at first it's all measuring proportions and checking angles, and seems so challenging. About 3/4 of the way through a drawing can kind of take off, and then I'm just hanging on for the ride. 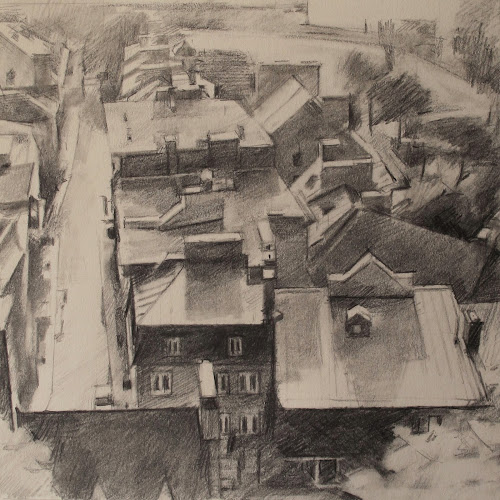 This has been my fourth day in this busy and fascinating place, and I'm still adjusting. I live in a small town in Pennsylvania (it's been 15 years since I lived in Philadelphia), and so it's taking me a while to get used to the traffic, lack of parking, and noise of this city of 700,000.

As far as Old Québec goes (Vieux-Québec), unlike the images in advertisements, the cobblestone streets are clotted with tourists. So, I have been focusing on drawing and taking reference photos, although I did a quick oil sketch yesterday in what I thought was a relatively tranquil spot. My easel attracted a ton of visitors anyhow, so I guess I just have to get used to it.

Another adjustment for me is using my new iPad for blogging, using an App called Blogsy.