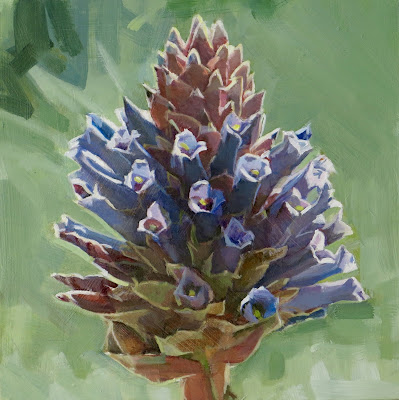 I like elucidating structure, whether it's that of buildings or vegetables, faces or flowers. This amazingly odd cactus flower gave me all the structure that I could possibly want, although it did take a while to put it all together!
Posted by Taryn Day 0 comments

In this lesson, my students took a painting surface measuring 8"x 12", and divided it into six 4"x4" squares. They painted a red delicious apples six times, only being allowed ten minutes per apple.

They could spend some time mixing their colors before the first timer was set, using their View Catchers to judge where the most saturated reds were, and what other colors were actually there- not what they assumed they'd find. I implored them to use red's compliment (green) to de-saturate the reds.

The top photo is of all the apples painted by all the students, while the second image is of just one student's six timed studies. 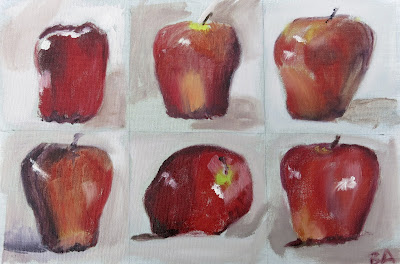 Next, everyone had to paint one apple behind another. The idea was to create a sense of distance by under-reporting the darks in the distant apple, and placing their most saturated reds on the closer one. They also slightly blurred the edges of the one in the rear.

I think they did very well with this exercise, and they seemed to find it intriguing. 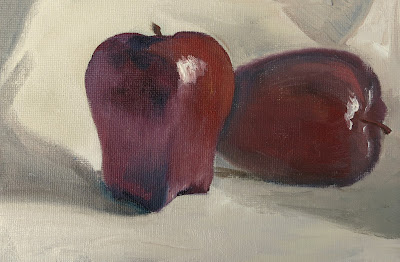 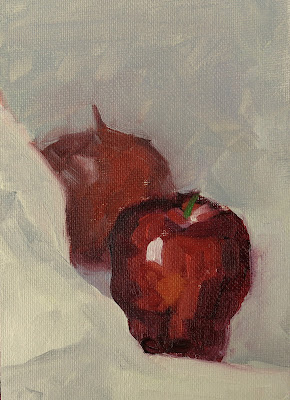 For our second lesson, everyone painted white objects that had colored papers reflected on their shadow sides. The main point of the lesson was that white is almost never pure white, but is easily (and often beautifully) influenced by its surroundings.

My students sometimes have trouble with tinting white and keeping its value light, so this was a good exercise for using restraint when mixing in other hues.

Here is one student example with sensitively observed whites: 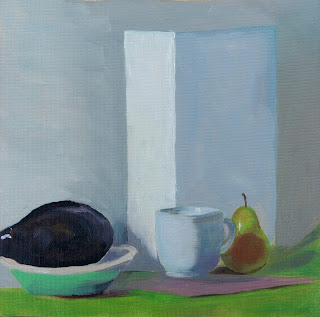 The third lesson was focused on painting glass. Each set up included two glass objects, one with nothing but white paper behind it and the other with colored paper and a mango. Everyone had to paint the simpler one first, then tackle the one with the mango.

The idea is that when you paint glass, you aren't really painting the glass. Instead you are painting what you see behind it. If a glass has nothing behind it, it likely is just ever-so-slightly darker in value than the background. You begin by simply filling in the entire shape with this color/value. Some under-reported edges (just the ones you see when you squint) and a couple of selective highlights can complete the feeling of glass.

For the other glass object, the lowered intensity of the colors of the mango and colored paper as well as the distortions as seen through the glass give the vase its transparency. 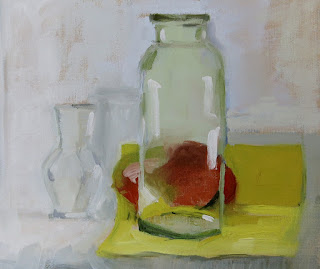 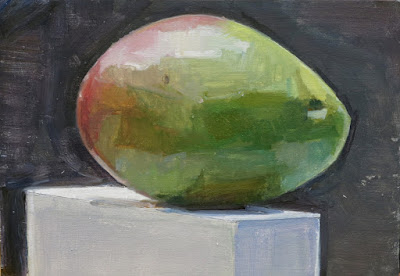 A very simple two day painting. Simple can be hard- there isn't a lot to hold on to.
Posted by Taryn Day 1 comments 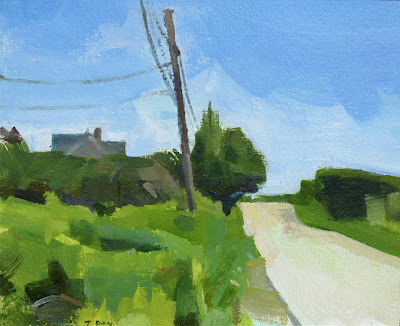 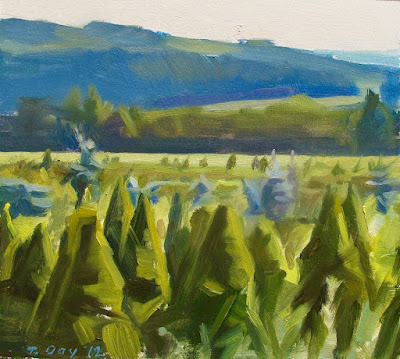 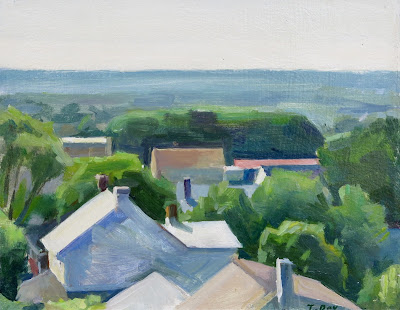