Almost to the Castle 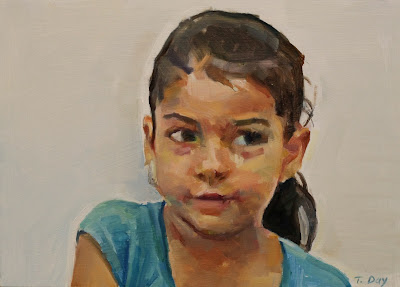 I photographed this charming girl at the Philadelphia Museum of Art. She was with several adults who were closely attending a tour in Spanish. The tour guide spent at least a half hour in each room, and the little girl kept gesturing and whispering to herself, wrapped up in an imaginary world.

She reminded me of my own daughter Julia's childhood, when she would often talk to herself while acting out some story in her mind. Once my brother-in-law, in observing Julia in the thick of her private play-acting, said "she's almost to the castle". That is such a wonderful way to put it!

I think my paintings have been getting a tad bit uptight lately, which is always painful, and I've been feeling a little blocked. Thankfully this little painting seemed to float out of me.